One of the biggest knocks about Italian horror, like Zombi, from American audiences is that the narrative is often confusing and sometimes downright nonsensical. In Italian cinema, the look and the atmosphere of a film is much more important than the script for the most part. However Lucio Fulci’s Zombi has a relatively easy to follow narrative for Italian fare.

Zombi is an unofficial sequel to the Italian cut of Dawn of the Dead. The classic American zombie movie, a cult classic, in it’s own right, was recut by Dario Argento and rescored by Goblin for it’s Italian release. Since Argento’s Dawn was released as Zombi, Fulci’s film was dubbed Zombi 2 in Italy. I wont get into the myriad of names and miscellaneous names slapped onto the horde of zombie films released in Italy and other areas of Europe, as that would take a full post of it’s own. 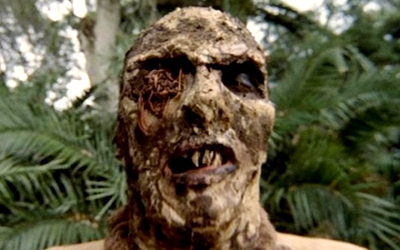 Zombi is the movie that made Fulci a horror sensation, and is in my opinion the best of thee European zombie films, with the possible exception of the first Blind Dead movie. I still think Zombi is technically better but the blind Templars hold a special place in my heart for pure coolness.

The Italians, especially Fulci had a way with gore and he spares no brain nor blood in Zombie. In Great Britain it made the infamous video nasties list, alongside such notorious movies as Cannibal Holocaust, I Spit on Your Grave, and Fulci’s own House by the Cemetery. A full, uncut, authorized and legal version was not released in Britain until 2005. Progress marches on, but it marches slowly at times.

Zombi starts out in New York City where a strange ship drifts slowly into the harbor. Officers investigate only to be attacked by a hulking zombie. One officer is bitten and dies, the other officer shoots the zombie, who falls overboard.

Reporter Peter West is sent to investigate the boat, where he meets the boat owners daughter. They decide to investigate by sailing to her father’s last known location, the island of Matool. They join with a couple Bryan and Ann to help investigate the island. Apparently Ann loves to swim and scuba dive wearing nothing but a g-string. YES. Before they reach Matool, Ann decides to do just that. The scenes of her diving topless would be one of the most well remembered scenes in the movie (still is with me) if not for the next scene.

Here we are treated to probably THE most iconic scene in zombie movie history. Sorry Romero, you may have had the biggest impact on modern zombie film, but this scene is classic. So classic it was just used in a mainstream commercial. That’s right the shark vs zombie. Way before the Sci Fi channel decided to mix and match shit that should never go together, Fulci did it and made it work. No need for former teen pop stars past their prime. This scene is made of awesome. If you haven’t seen it, I wont give any details, just see it.

After the attack the group heads on toward the island, where the dead are rising in ever increasing numbers. Dr. Menard is trying to find the cause of the outbreak, but is only holding his own. As night falls we are treated to another iconic scene and a Fulci trademark, when a woman’s eye is slowly impaled on a wooden splinter. When the group finally lands and meets Dr. Menard, the zombies are in full attack. Graves all over the island are starting to open and the dead, some centuries in the ground are rising. The survivors race to the boat to escape, fighting zombies along the way as their numbers dwindle. Who will survive? Will they make it to the boat and back to New York? And what will they find there. Like I said, got to watch it yourself.

As far as Italian cinema goes, Zombi is pretty easy to follow. It’s a pretty straight forward plot, but still contains all the great imagery and atmosphere of which the Europeans are famous. Some of the scenes are iconic and part of cinematic history. A bloody part of history maybe but still, they deserve their praise. The eye gouging is hard to watch even today, and to me looks far more realistic than most CGI eye gags.

The shark versus zombie scene is another that is part of zombie history. The fact this was filmed with no visual tricks should amaze film makers and fans alike. The scene was filmed in a giant tank with a real shark, and a real stunt man. The shark was fed horse meat loaded with tranquilizers before filming began. Still bravo to that stunt man for getting in the tank.

Zombi, or Zombi 2, whichever you prefer is one of the goriest nastiest zombies the general public is every likely to see. Once confined to drive in, and late night showings it is now readily available in several different cuts. It rivals Day of the Dead, but for pure gore, I still personally give the nod to Day. The Salazar elevator scene still makes me wince to this day.

Don’t look for a huge amount of social commentary or deeper menacing. This isn’t a Romero flick, this is a pure zombie horror survival movie. It keeps the action moving, cutting between the island and those on their way there. The slowest moment in the film is when we are treated to the wonderful scenic view of Auretta Gay as Susan diving topless.

The ending is meant to foreshadow that inescapable doom, in the same way that Dawn, and to a lesser extent, Night did, but for me that was the weakest part of the film. I think by the time I had seen Zombi, I had already seen similar endings, in similar films till I am a bit jaded. Even though it’s my favorite, it was far from my first Italian zombie shocker. As a kid in school back in the late 70s, and early 80s the papers were full of drive in ads. These ads were usually heavily saturated with European horror fare, especially zombie movies. I was too young to go to the drive in, but those wonderful ads were enough to set my heart on fire. I still have a special place in my heart for these films, even the really bad ones. Zombi isn’t one of the bad ones, it’s one of the best ones. People who only know a zombie from The Walking Dead or Warm Bodies, should definitely consider checking out Zombi. If you can take it