I have been a fan of The Texas Chainsaw Massacre since before I can remember. As a kid I saw the movie posters in the local theater, but never saw the film itself there. I’m not even sure it ever actually played there. TCM doesn’t sound like a good match for a small town theater in rural Mississippi in the 70s. I cant even remember when I first saw the movie. The commercials for it, and the sequels always intrigued me, but they also scared me a little. Okay, they scared me a lot. They promised blood, gore, and horror. Which was masterful advertising, since the first film has so little blood and gore.

What The original Texas Chainsaw Massacre did have, that it’s gorier remake doesn’t have is insanity. The remake is bloody, it’s violent, and it’s gory. The characters are evil and they are unbalanced. But compare the families, the Hewitt family versus the Sawyer family of the original. Although they really didn’t get a family name in the original, it works for here. The original family was absolutely insane. Look at the cook, played by the late Jim Siedow. “I dont take no pleasure in killing” he says, completely serious one moment, and the next he is cackling, and urging Grandpa on in his attempt to kill Sally Hardesty. The whole dinner scene is insanity. People like this are capable of anything. This is horror, this is what modern filmmakers don’t get.

It’s one thing to show people doing bad things, doing horrible things, but show people doing insane things and it’s scary. Jason Voorhess is evil but his movies are no longer scary. Why? Maybe because he’s predictable. Is he insane? Probably? Crazy? Not so much, if anything Jason is predictable. Come to Crystal Lake and he will chase you, slowly, catch you and kill you, especially if you are having sex. Leatherface? Well now, Leatherface will chase you at high speed. He will chainsaw his door to pieces, even though he could probably just open it, or cut through the lock. Leatherface will put you in a freezer and sit down and have a moment of self doubt. Leatherface will spin in the road with a running chainsaw. Leatherface is fucking nuts. Even worse, he’s possibly the sanest member of the family.

Probably the coolest thing about seeing The Texas Chainsaw Massacre remastered 40th anniversary edition on the big screen was seeing, and hearing people’s reaction. It was a small crowd, which was sad, but there were people there, and at least a few who had never seen the movie before. It is nice to know with all the crappy PG films, with all the horrible CGI, that the meat hook scene can still cause a reaction. Yep, some one exclaimed out loud, not the loudest shriek, but a reaction nonetheless. Call me naive, but I think a proper release with full studio promotion this film would draw. Yeah, I’m naive. Kids today are too jaded, they wouldn’t give it a chance, but if they did they would walk away happy, and maybe a bit scared to go down those lonely deserted roads.

So if you get the chance check out the Texas Chainsaw remastered 40th anniversary edition on the big screen, or just buy the DVD. It really is a wonderfully restored version, and well worth having without even touching on the extras. This is probably the best the film will ever look. But even beyond the Texas Chainsaw Massacre remastered 40th anniversary edition, if you are a horror fan, support when these films get shown on the big screen. Support the few small local theaters that still exist, and support your local horror community. For those of us living in the Lower Alabama, Florida Panhandle that is Nightmare Theatre and the Tree house Cinema in Gulf Breeze.

Nightmare Theatre will be hosting several cult horror films during the month of October, including Army of Darkness and The Rocky Horror Picture Show. If you are in the area I urge you to make the trip over the bridge and support these films, and the people hosting them.

Mad Cowgirl definitely ranks up there with the weirdest films I have ever seen. It’s one of those movies that really defies being placed in a genre. I consider it a horror film due to it’s copious amounts of blood and gore, but it has elements of action, drama, romance,martial arts, exploitation, and really a little bit of everything.

Mad Cowgirls centers around Therese, played by Sarah Lassez (Lo), a meat inspector who MIGHT have mad cow disease. Or possibly she might just be going insane, or maybe she’s imagining everything. Her brother Thiery, played by James Duval (Donnie Darko, Sushi Girl) runs a meat-packing company. It’s the height of the Mad Cow scare and Therese finds out her brothers beef is contaminated.

This is when she becomes convinced she is infected with Mad Cow Disease.. We’re never sure exactly, but she does appear to have some type of brain disease. Since her doctor is from Sri Lanka and never speaks to her in English, honestly I was never really sure what he was telling her. There did appear that she had some disease, but there is always the chance she was just going insane and everything was from her fevered brain.

One fact we know is that her love life is in shambles. Her husband has left her, and she s having a secretive affair with televangelist Pastor Dylan, played by Walter Koenig (Star Trek), which ends in a bad breakup. All the men in her life become her enemies, in a set of flashbacks that might or might not be real. She imagines battling them as in Hong Kong martial arts style scenarios, labeling them the “Ten Tigers of Kwangtung”. She also engages in an incestuous affair with her brother.

If all this seems weird, it’s because it is, and I am barely scratching the surface, and trying to be somewhat spoiler free. To be completely honest, I almost turned off Mad Cowgirl several times, but I just couldn’t. The weirdness kept me hanging on, during a few points when the films story really lagged. There were a few times when the weirdness just made me wonder why I was sitting though this, but I could not turn it off. Just like grabbing an electric wire, I could not ;et go even though I wanted to at times. 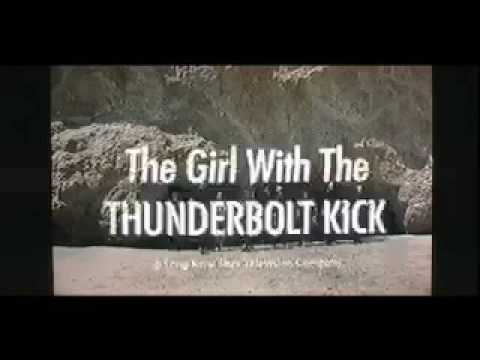 The weak points are that the strangeness at times is overwhelming. Scenes seem random and thrown together. That and at times the story does drag. It takes a sense of the absurd, and a bit of patience to enjoy Mad Cowgirl. But if you can sit through it there are some gems.

Sarah Lassez is wonderful as Therese. She is beautiful, and plays the part in a sad and tragic way that makes you feel for her, even in scenes that are disturbing. You really hope she is going to make it, even though you know she is doomed from the start. One of the most WTF moments for me was after her breakup with Koenig, when she lies back and spreads her legs against her big screen television while the Pastor is on the screen. As the camera zooms in for a close up she moans in ecstasy. It’s virtual head, with Chekov’s giant head on-screen. It’s more sexual than the head scene in Re animator, which was mostly played for laughs. The scene in Mad Cowgirl is just beyond surreal.

Probably the most controversial story line in Mad Cowgirl is the relationship between Therese and her brother Thiery. In all honesty, it is probably the best handling of incest I have ever seen in a film. It’s not gratuitous or explicit, and while it is shocking by it’s very nature, it’s mostly sad and desperate.

It’s no Game of Thrones, and you have to feel that this would be much closer to what would really happen in a relationship of this matter. You don’t feel her sickness drive them together, but something deeper, something that could be the root of her insanity. There would have to be something sad, and deeply painful to drive people into breaking that taboo.

With all the warped insanity of Mad Cowgirl, the scenes between the two was the most low-key, honest parts of the movie. The films doesn’t play it up or justify it, it just states it is a fact. It’s so matter of fact, that I had to rewind to convince myself they really were siblings.

Believe me I have only touched the surface of Mad Cowgirl’s weirdness. A lot of people won’t be able to handle the almost nonstop, and sometimes random insanity. But underneath the strangeness, there is a great little story with great acting and direction. It is underrated beyond my ability to measure. It deserves much more praise heaped upon it. Is it perfect, no. but for a low-budget film, with a cast of mostly unknowns, it accomplishes a lot. With all the mindless drivel out there, this gem of original insanity is refreshing.