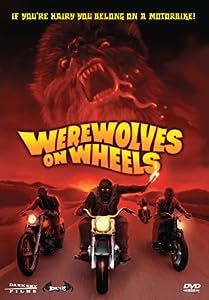 Werewolves have long been a staple of horror films, just like bikers have long been a part of exploitation cinema. So like a Reeses Cup, it was only natural that these two great flavors come together. Right? Right. Well it happened way back in 1971 with Werewolves on Wheels. Biker movies were all the rage, and horror was a hot property so it was a sure thing. For fans of exploitation films it is a little known gem today. With the Sons of Anarchy making bikers and gangs popular again today, it’s time for people to look up Werewolves on Wheels and give it a view.

The Devil’s Advocates are as tough as they come. The movie opens with them beating up a group of rednecks who were, not to wisely, harassing them. Then they head to a gas station, where they engage in more mayhem with locals. This includes torturing the attendant by insulting him, shoving him around, and having one of their girls show him her tits. They were merciless.

Finally tiring of this, they decide to try something more hard core. Possibly crossing the street without looking, I mean these guys are tough. One of the members tells the gang about a church he knows about where monks perform satanic rituals. Well now that sounds right up The Devils Advocates alley. So as dusk approaches they head to the temple, and upon seeing the monks begin to insult them and call out to Satan. All seems to be going great until night falls, the monks serve them wine and bread and they club passes out. Personally I think it’s sad if you cant trust a group of Satanic monks who you were just insulting not to slip something in your drink, but that’s apparently what happened. 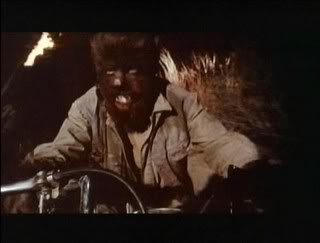 The leader’s old lady (see how cool I am using biker lingo?) wakes up and heads to the temple where a black magic ceremony takes place. Then one of the highlights of the movie happens as she starts dancing and winds up bare ass naked. The bikers then rouse from their slumber grab the girl, slug the monks and take off on their bikes.

Not fully understanding what happened, they seem to wander the desert drinking, fighting, and playing grab ass like all tough bikers. Then suddenly they start disappearing and dying each night. After more driving, and drinking, and fighting, and dying they finally discover that their president and his old lady are werewolves. This leads to a fight scene where there actually are “gasp” werewolves on wheels. This may be the coolest scene in the film, other than the naked dancing girl, when the wolfed out gang leader is chased by the other bikers carrying torches.

They finally manage to subdue and kill the werewolves, and the gang, now eager for revenge, head back to the monastery. Or maybe they just want to wrestle and play grab ass with the monks for a change. Even though they have wandered for days they make it back to the monks in record time. They charge in ready for some non gay, man on monk action, only to stop when they realize……(ready for it?)…the monks are actually the bikers. Cut to end credits.

You will probably get tired of me saying this but, like a lot of old exploitation films, it’s hard to call this a “good” film in any technical sense. The acting, at least of the leads, is really not that bad for a film of this budget or genre, the sound track is actually excellent and the filming is adequate, but that’s about it. The story is about as silly as you would expect from a movie called Werewolves on Wheels, the pacing is beyond tedious at times, very little blood and gore, and the effects are also about what you would expect.

The magic in cult and exploitation films though, is that little of this matters. There is just something about them that makes them fun to watch. Sometimes that fun is in laughing at the silliness on screen, but that’s OK. I’d much rather spend an hour watching Werewolves on wheels, be that motorcycles or even scooters, than an hour watching Tom Cruise smile into the camera.

With a film like this you are also allowed a glimpse into another time. It’s more than just “wow this is how bikers dressed in the 70s”, but more of “wow this was what was acceptable in the 70s to be shown on film.” Films in the 70s were becoming less restrictive, and a film like Werewolves on Wheels was bound for the drive in, or grindhouse anyway, so they got away with things you might not see in a big budget film.

It came out 2 years before the Exorcist enraged Christians with it’s demonic plot, and four years after Rosemary’s Baby did the same with a much tamer plot. So Satanism was a hot movie topic, and it shows in Werewolves on Wheels with it’s mixing of lycanthropy and Satanism. The satanic references in the film surprised me until I looked at the time frame of these other two movies.

Still it’s interesting that the film contains the overt references to devil worship, quite a bit of nudity, and almost no profanity. Apparently a fully nude (although only her breasts and butt were shown, no full monty) woman was acceptable, “Hail Satan” was acceptable, but no cursing please. Maybe it’s me but one of the funniest things while watching the movie was seeing these tough bikers NOT curse. Plus for bikers, the level of violence was really low. Lots of fighting, but very little killing (except by the werewolves) or extreme violence. Another taboo of the setting.

Werewolves on Wheels is one of my favorite finds in recent years. It really was just as much fun as I imagined it to be. While the mid point of the movie gets a bit tedious and slow, it’s not insurmountable, and worth sitting though for the payoff. Do yourself a favor, if you are feeling nostalgic, or just want to dive into the biker genre of the 70s, check out Werewolves on Wheels

I also need to add, that after a long wait, the sound track is now available from Amazon. If you watch the film, and want the sound track, I would appreciate you buying from the link below and supporting my blog. It’s not expensive to blog, but it isn’t free.