Writing a Machete Kills movie review should be a fun task. I am a huge Danny Trejo fan, and I loved the original Machete. I have been looking forward to Machete Kills since it was announced, and rushed to see it opening weekend. Sad to say, I was disappointed, and this has become a painful task.

Starting off with the good, there were a few great laughs in Machete Kills but they were too few and too far between. The casting of Charlie Sheen as the President of the United States was priceless. Almost every scene he is in is a winner. Mel Gibson as the evil billionaire was also fun to watch. All of the guest stars were fun to watch, and this was two of the biggest problems in Machete Kills.

First there were just too many guest stars and almost none of them got any serious screen time, and very little interaction with each other. Machete Kills became like a soup where too many good ingredients were thrown in, in haphazard amounts, and the finished product wasn’t very good. I think the first movie was so popular, that so many celebs wanted in and Rodriguez tried to shoehorn them all in. You actually have four different actors playing one character. The gimmick of that is funny, but none of the four get enough screen time.

The constant stream of familiar faces takes a toll on the returning cast from Machete. Jessica Alba has around two minutes of screen time. Michelle Rodriguez fares a little better but she doesn’t even appear till about the halfway point. There were several characters in the first movie that could have been fleshed out, and given more time and story in Machete Kills.

Some gimmicks, just look better in the trailer or still, than they did in the actual film. The biggest (no pun) was Sofia Vergara’s machine gun bra. The original publicity photo’s made it look awesome, but it just didn’t work for me in the film. When she introduced her “strap on”, it got a much bigger laugh from me. I think hiding the gorgeous chest of Sophia under an oversized metal bra was just counter intuitive.

Secondly, with all the stars, you almost forget Danny Trejo is in Machete Kills. Yes, he gets a lot of screen time, but his dialogue is mostly listing off things that “Machete don’t”. “Machete don’t text” was hilarious in the first movie, but it starts to wear thin in Machete Kills. Most of the scenes of Danny Trejo seem to be of him walking. Walking across the desert, walking to the rocket, walking to a garage, etc. Danny Trejo is an excellent actor, check him out in Sherry Baby if you think he can only do the tough killer/lawman character, and he deserves a better script than what he got here.

It’s fun to watch Danny kick ass, but this was just repetitive of the first movie, with less laughs, less fun moments, and just less fun overall. One major mistake in Machete Kills was establishing this idea that Machete is unkillable. In the original Machete, he was all too human, just tough as hell. He could be hurt. The hanging scene early on was just ridiculous, it spoils any notion that he was ever in any danger. Did I think he would get killed? No, but it’s different when you KNOW a character can’t be killed. It loses something.

Probably the worst thing I can say about Machete Kills was that it was boring. And it had no right to be boring. There were so many under used characters, so many decent ideas. But like guest stars they tried too much. Let’s not go with one plot but let’s throw in two or three. Just when you know what the movie is, it changes. Then it commits that serious movie crime of ending with a cliffhanger. I hate when movies just assume another sequel is coming. Is it ego? Really Robert did you think the character is so popular that the fans will demand another one, even if Machete Kills bombs? I hate loose ends so I hope there is another one.

If there is a sequel to Machete Kills, here is my advice. Strip it down. No new characters or guest stars (or a very few at the most). Tighten it down, concentrate on the four main characters who survived, Michelle Rodriguez, Amber Heard, Trejo and Gibson. Make them the focus of the main story line. More of Alexa Vega, she was woefully underused in her first “grown up” role. She showed real talent in Repo! the Genetic Opera, and thankfully, she showed her cute ass in Machete Kills. That two second tush shot was my favorite scene in Machete Kills. Lastly, do something with your nieces. The Avellan twins are smoking hot and extremely popular with fans. If you are going to use them, give them a role other than looking hot firing a machine gun. It’s time to see if they can act.

Give Danny Trejo more and better lines. He is Machete, and Machete don’t kill if he is underused. Make him that tough federale from the first movie, who is more than human, but still a human. And go with a grainy look to the film. Don’t try and make a “bad” exploitation movie, and make it look so clean. Plus that intestine scene? It’s been done twice in the first film and now Machete Kills. It’s old and no longer shocking, time to retire it. 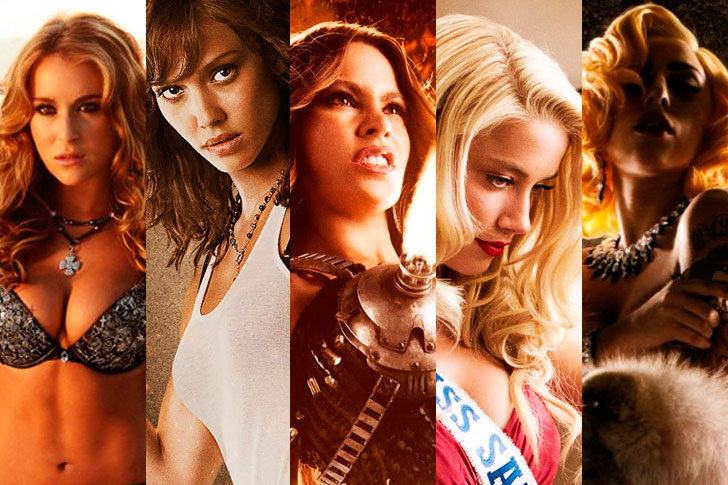 Thanks for reading my Machete Kills movie review